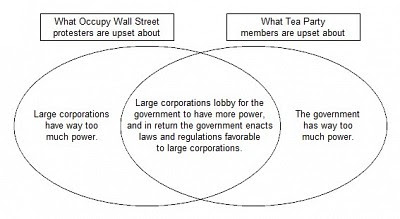 There has been a flurry of attempts lately to connect the two political movements of our time, Tea Party and Occupy. As a television news producer who often works to expand participatory democracy, this one hits my sweet spot: it’s newsworthy, it’s dialogue, and the way the media report it will really matter.

The Tea Party burst on the scene in 2009, and Occupy Wall Street in 2011. On a superficial level, their rallies look surprisingly similar: compare this typical Tea Party event in Medford, Oregon; and an Occupy protests in the same place two years later. Journalists and commentators have noticed some shared concerns, and numerous polls show a large majority of Americans, cutting across divisions of race, class and political orientation, are unhappy with the current state of affairs. The ideological, economic and cultural divisions among Americans are real, but were these groups to join forces, even on just a few issues, the results could be profound.

This is where the media come in. So far, there are only sporadic accounts of meetings between Occupy and Tea Party activists (for simplicity, lets abbreviate these as TPOWS). The number of spontaneous TPOWS gatherings that go unreported cannot be known, but when they are covered (for example, this one in Memphis, the discussions focus on participants’ shared interests, and people do not scream at each other. When a news event leads and doesn’t bleed, it bodes well for reasonable discourse. Besides Tennessee, there are reports from Virginia, Louisiana, and a handful of other places.

But TPOWS encounters have, generally speaking, taken two forms: besides the “Let’s sit around the table and seek agreement” model, there are debates, usually generated by news media and staged for TV, that focus on political differences:“Let’s argue with each other on TV.”

These conflicting forms of news coverage raise the question: what narrative will come to define TPOWS: A powerful union of the majority intent on sweeping away corruption, or another brick in the wall of division? The future depends on which narrative takes hold. If argument supersedes agreement, efforts to unite the citizenry around shared concerns will have very limited effect, while the divisions that have paralyzed our government will be held in place, even expanded, through a focus on rancor and discord. 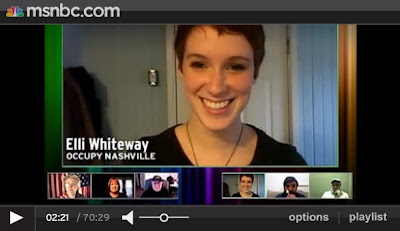 First, let me wear my j
ournalist hat and make the case for the “debate” version. News has value precisely because it roots out differences and reports on conflict. The perfect example of this is an adventerous online TPOWS “discussion/debate” livestreamed on MSNBC’s website, which used the Google+ Hangout multiple-webcam format to interview three Tea Party and three Occupy stalwarts. The goal was to bring up the differences between the two groups’ philosophies. To its credit, the program did not slow its hectic pace to focus on arguments that erupted. Then again, when issues arose that might have led to agreement, the host did not stop to discuss these, either. The result is an enlightening exploration of the philosophical differences between these groups.

And yet, despite its title, the MSNBC online encounter was rarely a “discussion” or a “debate.” It was a serial interview of six people, with the news host firmly in charge. Participant’s comments were cut off as needed, and the subject was changed whenever the host said so.

A sadder example, in which the news process defeated dialogue but very little was learned, appeared on the NPR program, “Tell Me More.” Ironically, the segment is titled, Tea Party and Occupy: Can’t They All Get Along? Well, no – because the reporter won’t let them! Although the segment included the respected facilitator Richard Harwood, who was apparently shanghaied into participating, the host Michel Martin cut him off as Harwood asked his very first question! Apparently she was just too eager to get to the disagreement part to bother with fuddy-duddy facilitation. The Tea Party and Occupy guests obliged, and the result was a predictable battle.

This is the crux of the issue we are exploring here, the degree to which the media call the shots. Rule of Thumb Number One: the more the conversation is controled by TV producers, the more “differences” rather than “similarities” will set the tone.

In a blog post after the NPR program, Richard Harwood drew a conclusion from his experience: in-person “talk-around-the-table” is the only way to successfully connect Tea Party and Occupy activists. But this means that the powerful forces of mass media are free to shape the TPOWS narrative as one of conflict. Harwood’s instinct, to take advantage of the offer to use media, is likely based on knowledge we all share: in today’s world, leveraging change requires media presence. So let’s turn the issue on its head: if an attempt to engage citizens in dialogue using media doesn’t work, then what aspects of the media format should be changed to make it work?

Some years ago, this thought would have not occurred to anyone. We all would just throw up our hands and accept that this is the way media work. But today, broadcast, print and web outlets of every type are exploring citizen engagement, and willing as never before to allow the public a voice. So, rather than trying to wedge meaningful dialogue into news formats designed to create conflict, better to begin working with media outlets interested in allowing citizens to drive the dialogue, and create formats that serve the needs of the people.

There is an excellent example of this approach, an experiment by the Southern Oregon Public TV series, Immense Possibilities, in which the host, Jeff Golden, brought together activists from both sides. To a TV producer’s eye, the show lacks a certain pizzazz, but fancy elements are easier to create than a genuine discussion in which Tea Party and Occupy adherents are willing to talk – and listen – to each other on camera. Golden made it work in a surprisingly simple yet brilliant way, which is the Secon
d Rule of Thumb: He invited people who were curious about the other side and willing to talk, rather than seeking the ‘leaders’ or people representative of one specific aspect of each movement. The fact that the participants turned out to be leaders of their movements, though not necessarily officially, says a lot for this approach.

I must note that Golden is a long-time resident of Southern Oregon, a skilled facilitator, journalist and former County Commissioner, so he is known and respected by both Tea Party and Occupy activists in his area. Yet I believe his program could be a template to help pioneer a format that is not yet defined. Our non-profit organization, Digital Citizen, is developing a process to leverage the voice of the citizen into the policy discourse that shapes our nation, and we will soon be working with Jeff and the TPOWS folks (the aforementioned pizzazz is our job).

Local newspapers with strong websites are also good places to create civilized dialogue formats. One of our partners, the Kansas City Star’s election site Midwest Democracy Project, is fertile ground for creating dialogue on similarities. Newspapers have a long history of editorial-page citizen engagement that puts a high value on the thoughts of their readers. Newspapers also have partnerships with local radio and TV outlets, which could lead to a successful version of the Tell Me More debacle.

Let me conclude with Rule of Thumb Number Three: Act while the formats are still evolving. All those who value unity over discord must get to work now, while the templates of the TPOWS narrative are still in play. If you are an activist, it’s time to look at those on the other side as fellow citizens and find shared concerns, lest both movements be divided and conquered by the very powers you are dedicated to reigning in. If you are a journalist, remember that the fame of no less a professional than Ted Kopple is based, in part, on his skilled management of televised Town Hall meetings in the 1980s. And if you are a facilitator, join up with the nearest journalist and make your mark on history, before its too late.

Our Guest Blogger this week is Evelyn Messinger, president of Internews Interactive, who is a television and Internet producer, and a pioneer of citizen engagement projects that define the parameters of digital connectivity. Her credits include daily news, features and documentary programs for the BBC, Link TV, PBS, PTV stations, CNN and others. She served as a non-profit executive for the Soros Foundation and the international media NGO, Internews Network.

This article is one of a series exploring the role of media in politics as the 2012 election approaches. Please see: Attack of the Attack Ads and Convergence 2.0.