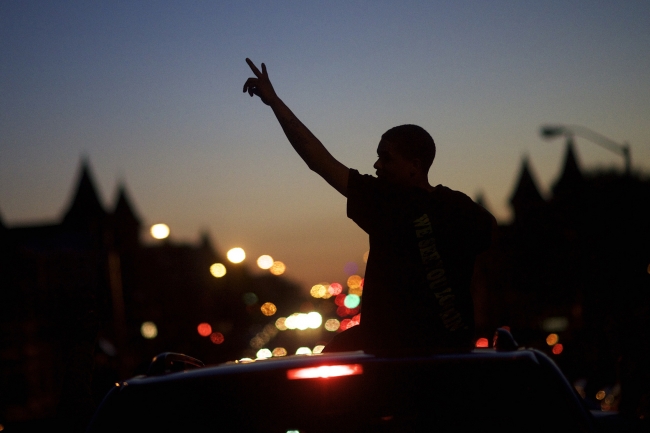 Channelling Funds Into Baltimore When They Need It Most

As suggested by Pia in her post on supporting emergent racial justice movements, we have previously advocated for the importance of moving quickly the time is right. While this article we are reposting problematically and racially describes Baltimore are “riot-torn” (we might reframe that as another epicenter for the struggle for human rights for black and brown folks) we are encouraged by the sentiment:

As tensions simmered down following riots that shook this city on Monday, foundations and groups here vowed to work harder to help people in neighborhoods affected by the destruction.

Two major foundations based in the city — the Annie E. Casey Foundation and the Open Society Institute-Baltimore — said they will accelerate their grant-making schedules to help organizations reach more people affected by events that led to the disturbances.

Rioters blazed a trail of destruction throughout the city in reaction to the death of Freddie Gray, a 25-year-old from West Baltimore who was mortally injured while in police custody on April 12. Many of those who rioted were high-school students.

Reaching young people like those has always been a goal of both Casey and OSI-Baltimore. In the wake of the riots, the groups’ leaders expressed new urgency, and they cited the longstanding anger many residents have felt in the face of poverty and poor behavior by the police.

“We know there are a lot of young people who got caught up in demonstrations who feel disconnected or invisible. They feel they aren’t heard and have no options,” said Diana Morris, director of OSI-Baltimore. “We feel like we’ve got to help them by doing the work we’ve been doing all along. But we also have to take advantage of this new openness we’re seeing. We try to be both strategic and opportunistic. This is one of those times when they come together.”

OSI-Baltimore is talking with its grantees, community fellows, and other organizations to find out the best way it can help them, Ms. Morris says. Soon, the group will beef up support to existing programs to reach more young people. “We want to make sure they feel supported and are getting the guidance they need,” Ms. Morris said.

The largest private supporter of criminal-justice causes in the nation, OSI-Baltimore has used its own backyard as a testing ground for a variety of approaches designed to reduce incarceration rates, reform police procedures, and help ex-convicts reintegrate into the mainstream.

The grant maker will intensify and accelerate that work as well, Ms. Morris said. It will also look to strengthen new coalitions of groups on the street that work to reform or improve education and voting access.

Casey’s leaders say they will seek ways to help their grantee organizations be more immediately effective, and will step up efforts to promote greater dialogue between its grantees and other partners. “This is such a fast-moving train,” said Sue Lin Chong, a spokeswoman for Casey. “We’re trying to get people together quickly to see where and how we can do the most good.”

The Association of Baltimore Area Grantmakers organized two conference calls Wednesday with a group of 20 local foundations and other organizations to discuss the best and fastest ways to deal with the crisis, she noted. The Baltimore Community Foundation, the Associated: Jewish Community Federation of Baltimore, and the United Way of Central Maryland have each set up funds to help churches, neighborhoods, and nonprofits, says Buffy Beaudoin-Schwartz, a spokeswoman for the association.

In a letter released Tuesday, Patrick McCarthy, Casey’s president, said the foundation “must redouble our efforts to create opportunity and hope in our hometown,” largely by continuing its work to improve the lives of at-risk young people 16 to 24 years old. “Right now, we need to better understand what is happening in our own city and make sense of the senseless,” he wrote.

Several groups, including the ACLU of Maryland and moveon.org, citing the growing number of protests against the police nationwide, have made the Baltimore riot the focus of email blasts.

And at least one group from outside the city says it will monitor street demonstrations to make sure Baltimore police follow legal procedures. On Wednesday, Amnesty International USA sent an “observer delegation” to Baltimore. The group, which will eventually be made up of six to 10 people, will watch demonstrations and protests to make sure police comply with human-rights standards, avoid use of excessive force, and use tear gas and other crowd control methods only when necessary.

The group is seeking permission to walk Baltimore’s streets after the nightly 10 p.m. curfew instituted Tuesday by Mayor Stephanie Rawlings-Blake.

“Our goal is to become a buffer of sorts,” said Steven Hawkins, executive director of Amnesty International U.S.A. “Any role we can play in quelling violence or agitation on both sides would be valuable, as we saw in Ferguson, where we became a voice on the street that police would listen to.”

Amnesty’s presence during the unrest in Ferguson following the police killing of Michael Brown marked a new role in domestic matters for the organization.

“We felt like we would have little credibility when we pointed out human-rights abuses in Mexico or other countries when we’re having so many instances of police-related disturbances and the lack of transparency that comes with them right here at home,” said Mr. Hawkins.

Though Tuesday was quiet in Baltimore, Mr. Hawkins said his group will remain in the city “for the duration.” The NAACP, which is based in Baltimore, and other organizations worry that the city could once again be faced with violence when a police report on the Gray case is released Friday, or later on if no criminal charges are ultimately pressed against police.

“Just because a crowd dispersed last night because of tear gas doesn’t mean it won’t be out there again tonight, and possibly with greater agitation,” said Mr. Hawkins. “There’s no reason to think that the worst is over.”

Article first published in The Chronicle of Philanthropy.